PEX Pipes: The Many Differences Between Pipes

Whether it’s in music, cooking, or tools to smoke various leaves the word pipe can mean so many things to many people. If your kid is being a bit unruly, the old phrase “pipe down” might be useful. Some say this was an old sailing term used to tell soldiers to traverse down a ladder or staircase to retire for the night. Or how about when your food is “piping hot”? Most believed the whistle of a teapot when the water has reached its boiling point is where the term came from.
Hundreds of years ago the Baluka tribe of the Congo established a tradition in Africa of using large gourds as smoking pipes. The tradition traveled to Europe and helped develop the use of the Calabash gourd to fashion the style of pipe portrayed in the Sherlock Holmes stories. Then there’s a piping used to make various woodwind instruments like flutes and recorders. Now if you look at a hollowed squash and a brass piccolo, you would never confuse the two. Yet they both can be considered pipes.
Wood, ivory, bone, cane, or other various metals are options for musical pipes or smoking pipes. Your plumbing pipes are typical of copper or a new material called “PEX”. For centuries lead was the metal of choice for plumbing because of its malleability; a metal’s ability to be shaped and formed. In our previous blog we mentioned where the term “plumbing” originates; lead in Latin is the word plumbum. The use of lead for porting water took a sharp dive after World War 2 when lead poisoning cases rose dramatically. 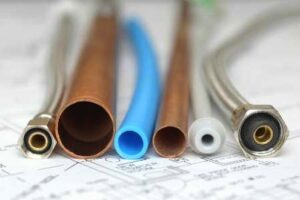 Many years ago galvanized (zinc-coated steel) piping took over as the more common choice for indoor plumbing after growing lead poisoning concerns. Galvanized pipes can last about 70 years but eventually, give way to rust from the inside out. This can happen quicker or slower depending on the minerals and other elements in the water.
Back in the ’60s, the use of galvanized pipe began to decline. Other types of metal pipes began to find favor because they were easier to work with.

That brings us today’s metal of choice for plumbing – copper pipe. Copper pipe has several advantages and benefits over the older metals used.

Then there’s PEX pipe. PEX is the newest technology in plumbing. PEX stands for PolyEthylene with cross-links (X). Cross-linking is the bonding of one polymer (plastic) chain to another. All PEX pipes come with specifications and classifications. Prior to PEX, PVC (polyvinyl chloride) was the most used plastic piping. Yet, PEX pipe holds several advantages over its older cousin and even over copper pipe.
Now while PEX pipe seems to have more benefits than its alternatives it does have some drawbacks that one would need to take into consideration.
First, it is plastic. So that means there is often an aftertaste and smell that accompanies using PEX pipe. It can and usually does go away after some time but the initial odor and taste can be an issue.
Secondly, as with any synthetic polymer, there can be chemical concerns. Recent reports and studies have shown no conclusive evidence of PEX piping causing any health issues yet some builders and environmental groups are still hesitant to embrace PEX as an alternative.
Lastly, some insects find it tasty! Certain insects can in fact puncture PEX piping if left to chew at it long enough. Most notably the Western Conifer Seed bug of the Rocky Mountains.
So what’s right for you, your residence, or building can depend on a number of different things. Whatever your piping needs may be, Mitch Clemmons Plumbing can help you determine what suits your budget, environment, and daily needs best.