Many homeowners usually think tap water is safe to wash in, to cook with, and to drink directly from the faucet. However, this isn’t always the case. The water that flows out of your tap can be hard and contaminated.

However, you can connect a home water softening system to clean up your tap water to remain healthy. A Water Softener Service can help you install the system.

Take a look at how the water softening system can make your family healthier.

It Softens The Hard Water

If you notice the water you use is constantly leaving a white flaky residue if your clothes become stiff after you wash them, and if you’ve been breaking out more often than usual, you are most likely using hard water.

That flaky residue indicates too much magnesium and calcium in the water and it gets into your pores too apart from your clothes. A water softener uses a combination of salt and special beads that can help pull all the pesky minerals out of your water, making the soap more effective, allowing your clothes to get clean, and also significantly improving the hair and skin health.

It Clears Iron From The Water

If your water runs orange, yellow, or a deep and murky red, it is a sign of an unpleasant concentration of iron in your tap water. Iron is one of the most common and undesirable contaminants which are a result of either iron seeping down from iron-rich soil or old rusting iron pipes. The iron-filled tap water can lead to icky red staining in your toilet and sinks and turn anything you cook dark and bitter. When you install a water filtration system, the iron can easily be filtered. You can drink and use clear, delicious water.

Water that is rich in chlorine can give off nasty fumes, burn your eyes, cause health problems, and can also pose a cancer risk in the long-term. You can filter the chlorine out with the help of a water filter system easily.

At Mitch Clemmons Plumbing, we have a team of experienced plumbers who can help install, maintain or repair any kind of water filtration system. We care for the wellbeing of our community and work toward providing your family with a healthy lifestyle. We serve families in Fullerton and La Habra and many families recommend us as the best Water Softener Service. Make a call at (562) 247-4994 today for Water Softeners Service. 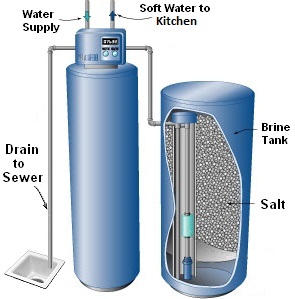 You can make proper use of a water softener only when it is installed and maintained correctly. In this post can learn the key elements of both water softener installation and maintenance.

In case you are wondering what purpose a water softener serves, it is a piece of equipment that performs the task of softening the hard water. It can replace minerals including calcium and magnesium with the sodium ions. Note that the job is best done by a Water Softer Service.

You don’t have to put your property at risk by installing or maintaining your water softener yourself. Get the help of Mitch Clemmons Plumbing for precise plumbing installation and maintenance. Or if you already have a water softener installed at home that is not functioning well, our efficient and experienced team can check to see if it can be repaired. Give us a call 562-362-3218,

History of the Water Softener

Water softening has changed dramatically over the years. It may surprise many to know that water softening has been around since the early 1920’s. A paper published on May 16, 1923 by John C. Whitehorn discussed the need to remove certain chemicals from water to address mental disorders. (We are not suggesting that is true.)

It was discovered that zeolites are a naturally occurring silicate. The zeolites serve as an ion exchange system. The minerals in the water stick to the zeolite bed. Then a salt water solution (a negatively charged ion) is then washed over the zeolite bed and they release the stored minerals which are flushed away.  The zeolites are recharged and ready to work again removing the damaging minerals the ruin plumbing, cause dry skin and hair, and leave a film on fixtures.

Even though water softening has been around for nearly a century, most homes still have hard water issues. According to the US Geological Survey over 85% of the country have hard water. The areas found with the hardest water were from West Texas, Colorado to Southern California.

What are my Options for Water Softeners?

There are a few ways to soften your water. The most common option is connecting a water softener to your current plumbing. Most softening systems use salt to assist in the removal of calcium and magnesium; the common culprits in hard water. The process called “ion exchange” is basically a trade of minerals. Most water softener systems have a tank filled with beads (the zeolite bed we mentioned earlier) that carry a negative charge. And as you probably guessed, calcium and magnesium carry a positive charge. The salt (a negatively charged ion) comes in to help remove the build up of calcium and magnesium in the ion bed allowing the system to continue to remove those minerals. 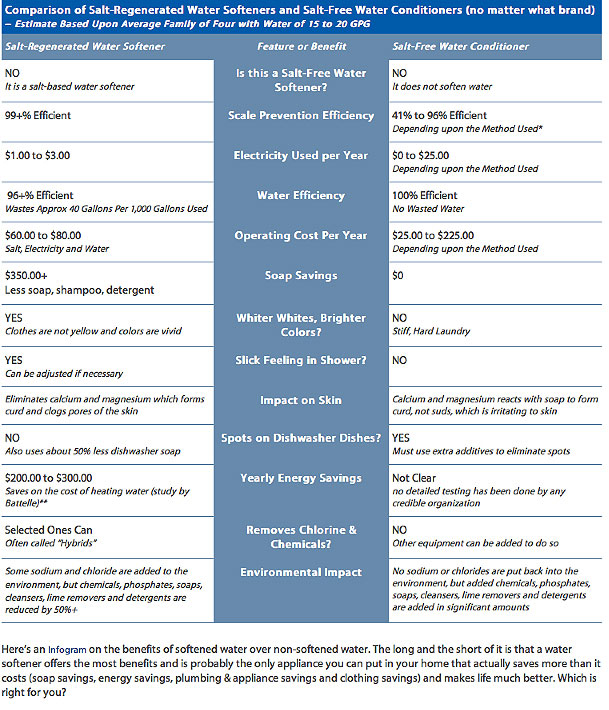 Most softeners use salt to recharge the ion base. However, there are some systems that offer a “salt-less” alternative. These came out about 20 years ago and became quite popular. Some look to this option due to concerns with sodium intake. The issue is, they’re really not what they’re billed to be. A salt-free “softener” uses other methods to deal with some aspects of the hard water, rather than the traditional ion exchange method. This type of water softener is actually more of a water “conditioner” rather than true water softening. Or what some call descaling. It may stop minerals from forming or staining surfaces that the water comes across but it doesn’t truly remove the hard water minerals.

The truth is you have to add some sort of mineral or chemical to remove the another. So salt-less soft water units may have some value for other reasons but as far as helping your hard water issues, not so much. These systems are also very expensive so beware of anyone that is pushing this sort of system. For a more detailed article about this click on this link: Water Softener of Water Conditioner?

Some people worry about getting the minerals they need through the water they drink. However, minerals are better absorbed via the food we eat. In fact hard water has been linked to kidney stones. A study suggests that, in the preventive approach to calcium nephrolithiasis, soft water is preferable to hard water, since it is associated with a lower risk for recurrence of calcium stones. 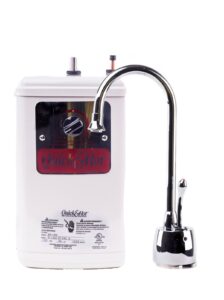 That’s right! If your water has contaminants, chlorine, or fluoride that you want addressed you need a reverse osmosis system. It is not uncommon to install a softener and a reverse osmosis system to address all possible water issues. If installed properly and maintained these systems can prove to be a tremendous benefit to your family’s health and the welfare of your plumbing and appliances.

In addition to the reverse osmosis system that can be installed at the kitchen sink you can add a hot water machine. This provides instant hot water that can be used for tea, coffee, instant foods that use hot water, and so many other uses! It’s been a wonderful addition to my home and I would recommend it highly.