In 1837, the area known as Rancho San Juan Cajon de Santa Ana was a part of a land grant to Juan Pacifico Ontiveros. Ontiveros was the Foreman of the Mission at San Juan Capistrano. The cities of Anaheim, Placentia and Fullerton would develop from this land.

Fullerton would grow to become a noted college town with 3 institutions of higher learning; CSUF, Fullerton College, and Hope Int’l University. Its downtown are would eventually become an incredible night-life destination due to its SoCo District.  But it would not surpass the fame earned by its sister city, Anaheim and the magic kingdom—Disneyland. Yet, Fullerton is still one of the coolest and historic towns in all of Southern California.

Fullerton, at end of the 1800’s, had more orange groves than any city in the entire country. It is also consider the birthplace of the electric guitar. Leo Fender opened his Fender Radio Service in Fullerton in 1938. After building and repairing amps and PA systems for bands and musicians Fender created the iconic Telecaster around 1950. It’s home to one of the most successful collegiate baseball teams in the country in the Cal State Fullerton Titans. 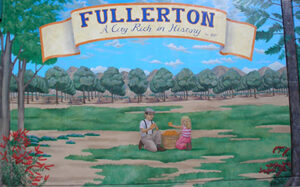 Trains are also a rich part of the history of Fullerton.  In fact its name is due to the grand expansion of railroads through Orange County. The Amerige Brothers, George and Edward bought some land in northern Orange County and said they’d name the place after the George H. Fullerton if he ran his tracks through it. Consequently, he did and they did. They laid their claim on the corner of Harbor and Commonwealth near the main train station where Amtrak and Metrolink trains are in service today.

Prior to this the area of Fullerton was home to some prehistoric creatures. There’s bones and other artifacts to suggest the Mammoth and saber-tooth cats roamed the terrain in and around modern-day Fullerton. Ralph B. Clark park is woodland recreation center that stretches from Fullerton to neighboring cities Buena Park and La Mirada. It houses amazing fossils found in Fullerton including a 9,000,000 year baleen whale skeleton.

Now, Mitch Clemmon’s Plumbing hasn’t been around that long. But since about 1992, Mitch Clemmons has been working as a plumber serving this same area where Mastodon’s and Smilodon’s ran free. While these prehistoric creatures and landmarks have left their mark in Fullerton and the surrounding area, Mitch has done the same with quality service, expertise, and affordable prices. He started out first laying sewer pipes for residential homes to servicing large commercial properties today. Therefore, the Mitch Clemmons Plumbing that legacy continues. The breadth of services our team provides range from:

All these services provided by a Fullerton plumber come by way of extensively trained technicians using highly advanced equipment and products. So from using high density PEX tubing to or our efficient electronic leak detection system we have you covered like the tracks of the old Santa Fe that ran though downtown Fullerton. Give us a call!  (562) 242-3218